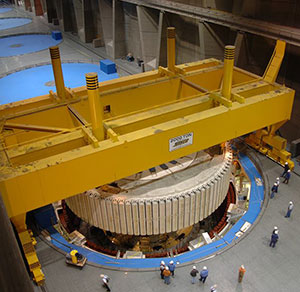 Originally built in the 1930s, the Grand Coulee Dam in Washington State has been undergoing a series of maintenance projects to ensure that it will continue to produce safe and reliable power into the future. One stage of the project required the heating of a 40-ft wide, 7-ft tall outer headcover of the turbine shaft to specific core temperature.  In order to achieve this temperature, the engineers applied induction heating to one side of the workpiece.

Only when the opposite side of the workpiece reached target temperature could the maintenance engineers be certain that the required core temperature had been achieved.  The team from Red-D-Arc provided induction heating systems and assistance with training and set up during this essential part of the maintenance process.
END_OF_DOCUMENT_TOKEN_TO_BE_REPLACED