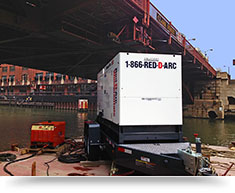 Walsh Construction, a nation-wide contractor based out of Chicago, was encountering delays on some repair work that they were performing on bridges on the Chicago River in downtown Chicago. They had been using the stick welding process (SMAW) to weld ¾” studs onto piles which were then driven into the riverbed. A quality assurance (QA) technician requested the use of a stud welder to ensure greater placement accuracy and an increase in speed of the welding cycle.

Red-D-Arc supplied a 150 kVA generator and an ARC1850 stud welder – used to attach the studs using the stud welding process which sped up the whole process. The generator/stud-welding package was loaded onto a barge which enabled them to move from bridge to bridge, commencing with the Clark Street Bridge (shown). One of the largest and most impressive of the pony truss bascule bridges in downtown Chicago.